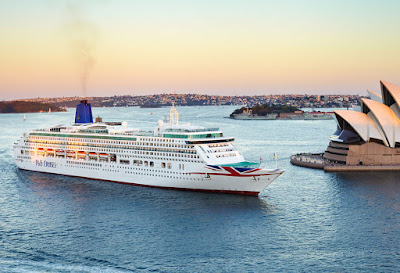 In what is a rare event, both the arrival of Cunard's  Queen Mary 2 and P&O Cruises' Aurora were both delayed due to a North Atlantic. Both ships departed Southampton on 9/16/2018 en-route to the Big Apple.

New York was a port of call for the Aurora so visiting cruise passengers had about 3 hours less time to spend ashore.

The Queen Mary 2 arrival was quite a different story, her disembarking passengers were possibly late for their flights home or missing shore-side commitments, The majority of cruise passenger for the next cruise were arriving at the pier in anticipation of a 1 PM boarding. The crew was under added pressure with having to unload luggage, strip and restock the stateroom with clean linens and scrub them down. In addition, load the luggage for the embarking passengers in a short time.

Sunday night the Aurora remained docked - offering passengers a planned overnight stay in New-York while the Queen Mary dropped her ropes just after 9:00 PM heading to New England and Canada for a 14 day voyage.