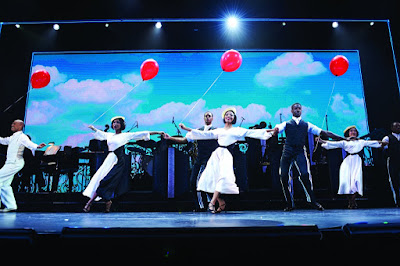 The announcement, which illustrates the company’s dedication to high-caliber entertainment, comes on the heels of its successful launch of Tony Award®-winning musical Jersey Boys and its original production ¡HAVANA! as well as the debut of Syd Norman’s Pour House, an authentic and immersive experience inspired by the greatest clubs in American rock ‘n’ roll history.  The increase in star power is in response to the incredible reception of Broadway’s own, Tony Award®-nominated, Brenda Braxton, who has routinely starred in After Midnight aboard Norwegian Escape since its introduction into the fleet in 2015.

“We are thrilled to engage these celebrated Broadway stars and very happy to welcome Melinda, Sharon and Melba to the Norwegian Cruise Line family,” said Richard Ambrose, the company’s vice president of entertainment. “We have long invested in elevating entertainment on board our ships and working with these powerhouse singers is yet another example of our commitment to exceeding guest expectations with world-class entertainment.”

Beginning August 19, American Idol alumnus and soul songstress, Melinda Doolittle, will make her at-sea debut as the lead in the critically-acclaimed Broadway show After Midnight, which celebrates Duke Ellington’s time at Harlem’s famed Cotton Club during the Jazz Age. Doolittle will perform for six weeks aboard Norwegian Escape with Broadway veteran and television actress, Sharon Wilkins, taking over the role on September 30. A 21-year Broadway veteran, Wilkins is an accomplished on-screen actress having performed in films and television series including Maid in Manhattan, National Treasure, Law and Order: SVU and Rescue Me. Wilkins will perform until December 9, 2018 and will reprise her role in February 2019.

From December 9, 2018 to February 1, 2019, three-time Grammy Award-nominated and Tony Award®-winning R&B singer, Melba Moore, will take over for Wilkins as the lead in After Midnight.  Recognized as a notable figure within the R&B music genre throughout the 1970s, 80s and 90s, Moore has long been a prominent Broadway vocalist with performances in the Grammy and Tony Award®-winning musicals Hair, Les Misérables and Purlie, where she won the Tony Award® for best performance by a featured actress in a musical in 1970.

In addition to performing in After Midnight in the Escape Theater, the three stars will host their own Cabaret Show in The Supper Club, offering guests a more intimate performance including solo singing acts with a three-piece band.

The ship’s entertainment schedule features a rotation of these stars well into the 2019 cruise season.

“It is incredibly exciting to be working with Norwegian Cruise Line, a company that is truly redefining entertainment at sea,” said Melba Moore. “I’ve performed in many different arenas throughout my career and am very impressed with the dedication and passion of the team at Norwegian. They really do push the limits to deliver an unforgettable experience for guests.  I am anxiously looking forward to joining my fellow cast mates aboard the stunning Norwegian Escape later this year.”

Norwegian Cruise Line’s award-winning entertainment features ten Broadway shows across its 16-ship fleet, including Tony Award®-winners and nominees including After Midnight, Jersey Boys, Rock of Ages and Million Dollar Quartet. The company continues to work with top talent from Broadway, including the original creative teams from a majority of top productions, including a long-time working relationship with Tony Award®-winning choreographer and director, Warren Carlyle, who worked on the original tour of After Midnight.