Check Out the Latest Cruise News Worldwide at Our Sister Site - NicksCruiseCorner.

On NYCruiseInfo's sister site - NicksCruiseCorner - we are covering cruising way beyond the Port of New York and New Jersey. Check out all of the latest worldwide cruise news below.
NicksCruiseCorner is updated daily, so please be sure to check back frequently and tell your friends.

The Americana, which was built in South Korea for Norwegian-owned Ivaran Lines, was a pure container ship that also will carry 108 passengers. The 19,203 ton ship measures 580 Feet long; 85 feet wide and carried 1,120 20-foot containers. At a time when most container ship operators shunned passengers in favor of cargo, Ivaran says carrying people along with cargo mades financial sense. Ivaran, which has sailed between North and South America for 62 years, expects the additional revenue from passenger travel to make up for the added costs of building first-class accommodations on the ship. The first voyage from New York to South America was in February, 1988 which was 46 day voyage that stopped at about 15 ports in the United States and South America, such as Rio de Janeiro, Santos and Buenos Aires. Ivaran's Americana was the only cargo ship operating from the United States with more than 12 passengers and in luxury. The ship carried a doctor and 25-person hote
Read more

Our NYCruiseInfo Blog Is Moving. - Come Visit Us At Our New Web Address. 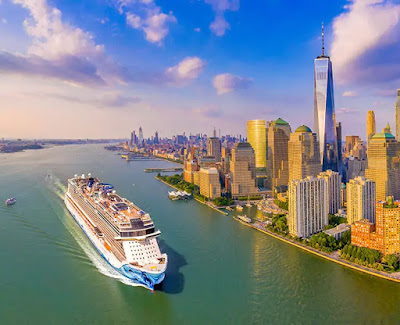 Our Blog Will Continue But We are Moving to A New Address - Still Covering Cruising From New York and New Jersey. Due to recent events, we have decided to consolidate our blogs and move the hosting of those blogs from Blogspot to our own website. We will continue to provide cruise news, ship reviews, cruise schedules, features articles  and more.  We will be focusing our efforts on continuing to provide a detailed web site focused on cruises sailing from the Port of  New York and New Jersey. I hope you will visit us at  NYCruiseInfo.com Website for daily cruise news posts going forward. THANK YOU for your loyal readership over the years and I appreciate your support. Come See Us At Our  New Location -NYCruiseInfo.com Website - We are Waiting For You   .
Read more